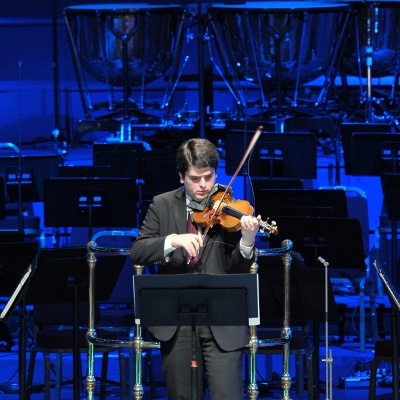 Violinist Michael Barenboim releases his debut solo album in January 2017 featuring the unusual juxtaposition of Bach, Bartók and Boulez. Three works demanding huge technical capabilities and pushing the boundaries of the violin’s playability, the album includes J.S. Bach’s Sonata in C Major BWV1005, Bartók’s Sonata Sz.117 and Boulez’s Anthèmes I & II. The latter, which Michael Barenboim recorded at IRCAM, is a celebration of a long history of collaboration between the late composer and the soloist, who worked on Anthèmes together….

Michael Barenboim was brought up in a multicultural environment between Berlin and Paris, is fluent in several languages and studied Philosophy at the Sorbonne.

« Menahem Pressler, 93 today, marks it with a hometown concert

What it’s like to see a conductor in the round »