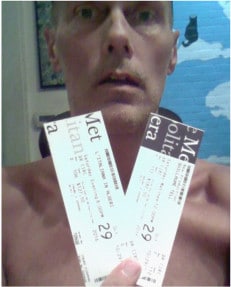 The Met’s ash scatterer is dismayed by the furore

Roger Kaiser has gone to ground. He has deleted six years of posts from his Facebook page and is not taking calls.

The Dallas opera fan is refusing to comment on his reckless act last Saturday, disrupting one opera and causing the cancellation of another. A friend says he’s really, truly sorry.

Dallas actor Paul J. Williams, who said he communicated with Kaiser, his Facebook friend, on Monday. All Kaiser did, Williams said, was carry out a warm, loving gesture, an act of compassion made to honor a friend who loved opera. In other words, think of it as being no different than Chicago Cubs fans scattering their loved one’s ashes at Wrigley Field, which despite warnings against it, baseball fans are prone to do anyway…

Kaiser, Williams said, ‘had absolutely no intention or even thought that this would create a problem. He was doing it solely for his beloved friend. As far as I know, it was just a friend. I’ve never known Roger to be in a relationship.’