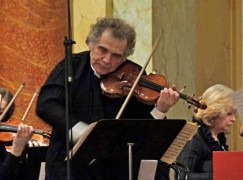 So Zakhar Bron won in Shanghai

In the bleak dawn after the inaugural Isaac Stern Shanghai Competition, it will come as small surprise that the first prize was won by a pupil of one of the judges, the prolific Zakhar Bron.

Mayu Kishima, we learn from her official biography, ‘began her musical education in Tokyo. In 2012 she completed her studies at the Cologne University of Music and Dance under Prof. Zakhar Bron. In 2009 she was a prize winner in the Queen Elisabeth International Competition in Brussels. In 2011 she won the International Music Competition Cologne and also the David Garrett Award for an outstanding interpretation. In the same year she entered the XIV Tchaikovsky Competition.’

In other words, she has been on the competition circuit for seven years before winning a significant award, in which her teacher sat on the jury. In any field other than classical music, a judge would not be allowed to award marks to his or her own protege.

This result inspires little confidence in the competition process as a means for discovering and promoting new talent.

« Elite Conservatory is being wound down

Another US orchestra heads for showdown »