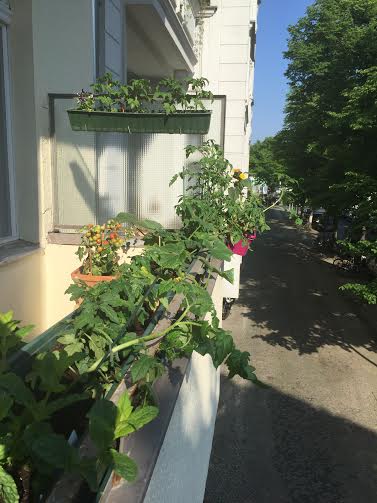 Nailing down a new quartet, turning a hater into a friend

Anthea Kreston, American violinist in the Berlin-based Artemis Quartet, barely paused for breath this week, what with premiering a new piece, connecting every Curtis alumnus in Germany and embracing a hostile Slipped Disc reader.  Read her latest diary instalment below….

When we (Jason and I, I suppose) decided to take this adventure, I decided to do several things.

1- lower my expectations in every way

Number 2 is vital – and I don’t want to get overly-optimistic here, but I can say that this group is made of people with absolutely no egos – they are without exception open, supportive, sensitive, and are as flexible as can be.  They want to draw out my ideas, both musically and in terms of larger group decisions – and because of this we have begun to craft a new sound – a sound based on and respecting the foundation of the Artemis – but something again new and vital. And I am glad to see that the reviews are noticing this too.  Not that we should read reviews – I once had a teacher who said “if you read reviews, you have to believe the bad ones as much as the good ones – it is best to rely only on yourself and ignore all outside noise”.  But I can’t help myself from reading….

The Curtis Institute of Music is an incredible institution – I like to think of it as a living museum – a collection of the greatest living musicians – who teach and mentor the next generation. It has the lowest acceptance rate in the United States – clocking in at 4.8% – following Curtis is Stanford (5.1%), Harvard (6%) and Yale (6.3%).  The auditions are grueling – a recorded round, and two live rounds in Philadelphia, where the school is based in a mansion (with surrounding buildings) facing the beautiful down-town Rittenhouse Square. World-renowned violist Roberto Diaz has taken the helm as of 2006 and has since opened the doors of this institution – beginning programs which reach out to communities, a variety of camps (including adult amateur) and many other things including Curtis on Tour.

It was through this that I re-connected – I attended a concert at the Konzerthaus in Berlin (incredible concert) and went to the alumni post-concert event. Curtis recently received one of the largest-ever gifts made to an American music school – $55 million from the departing board president  Nina Baroness von Maltzahn, who I believe lives in Berlin. This gift funds both the quartet program and their global touring program. When we lived in Oregon, I contacted Curtis to get a full list of musicians who lived between San francisco (South), North to Vancouver, and East to Boise. The list was very, very small. It wasn’t really even a list. When they sent me, last week, the list of alumni in only Germany – it took two pages of small-type. What a fun thing to mull over – the possibilities are endless.

The Artemis selected Eduard Demetz, a composer from the German-speaking part of the Italian Alps, for the winner of their quartet competition, which had hundreds of applications. We worked on this piece last month with Eduard, and again this week before the Premier at the Philharmonie in Berlin. I have put together many new works with groups before, and the integrity and depth to which the Artemis goes in preparation was incredible. Every note is spoken about – each person’s ideas tried out – characters clarified, a complex web of cuing is put in place and continually modified. The result, I believe, was stunning. “Broken Islands” (based on the composer’s kayak trip through the islands off of Vancouver Island) is a 5 movement work with three smaller movements nestled in between. It is honest and emotional music – it falls well on the hands and is easy to connect with. We will be playing the piece many times in the coming months. Between now and June 20 we play in Vienna (2 times), Düsseldorf, Gauting, Bensheim, Frieberg, Homberg, Leipzig, Gent, Schwartzberg and Istanbul (Schubert Cello Quintet with Gautier Capuçon).

Here are two videos from Chapel of me teaching two wonderful young groups – in case you want to see my crazy hair.

RW2013 is a frequent commenter on this diary’s comment section. Let’s not mince words here – I don’t think it would be too much to say this person has a seething hate for me. Take a peek. They shoot from the hip and go for the heart.  But – in my mind it was smart writing and clearly from an intelligent and passionate person. When it started to become clear that this person lived in Berlin (in fact in my neighborhood) I started to put aside tickets for our concerts under RW2013 (the box office certainly raised a collective eyebrow at the request).  This past week, RW took me up on the offer. After the concert, a somewhat shy-looking person came to me and showed me their ticket with their name on it. I was so happy that they came I gave the person a huge hug without even considering that they might not want a huge hug from someone they might really not like at all. But – of course we connected – of course I knew we would. We talked, we walked, I was late to the cd signing because of it, they met the quartet, they tried to apologize (I think?) but I would have none of it – it is all good clean fun, a coffee date is being arranged, and they even offered me their beautiful antique desk to help us because they know we don’t have furniture yet!  Talk about the cherry on my weekly Kuchen.