Costa, who has been head of Philips and Decca, with a further spell as president of EMI Classics, is one of the last labels chiefs still standing from the golden era, and always the nicest.

He will take a slow boat around the Mediterranean for the next couple of months, returning later this year as a consultant and talent scout for Universal.

Here’s the staff memo that has just gone the rounds: 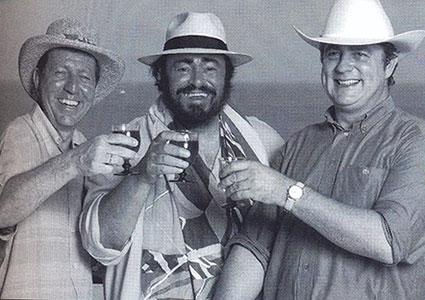 I am writing to let you know that the inimitable Costa Pilavachi, our much admired Senior Vice President, Classical Artists and Repertoire is stepping down from the role at the end of this week.

Taking some well-deserved down time, Costa will be embarking on an incredible journey for the next two months, sailing his boat from England to Greece.

Although Costa is moving on from his full-time role with us I am glad to say that from September he will return in an advisory capacity, working directly with me in addition to continuing his efforts with artists, labels and other projects including talent scouting.

As well as his continued work at Universal Music, Costa is a member of several advisory boards, most notably the International Mozart Society of the Salzburg Mozarteum, the Istanbul Festival, the Birmingham Conservatoire, the Verbier Festival Academy and the Toronto Symphony’s committee for the forthcoming Canadian Sesquicentennial.

Costa’s career has been nothing short of phenomenal. His wealth of experience in classical music takes in over four decades of high profile positions the world over, including at Toronto Arts Productions, Canada’s National Arts Centre, the Boston Symphony and Tanglewood Festival. Prior to his most recent role, he served as worldwide president of three major classical music labels: Philips Classics, Decca and EMI Classics.

In 1999 Costa played an integral role in the merger of the Philips and Decca labels, leading the combined Universal Music owned group until 2006.

Costa has been central to the signing and, or, the success of a great many classical artists at Universal Music including Valery Gergiev, Andrea Bocelli, Seiji Ozawa, Mitzuko Uchida, Hayley Westenra, Sir Neville Marriner and many others.

His knowledge and input have been invaluable and imperative to Universal Music’s continued success with classical music and we have been lucky to have such a passionate and invigorating person on our side.

I look forward to working with Costa in the future and I’m sure you will join me in wishing him all the very best for his next adventure.

Thank you Costa for all your hard work and achievement at Universal Music.

PRESIDENT AND CEO OF GLOBAL CLASSICS