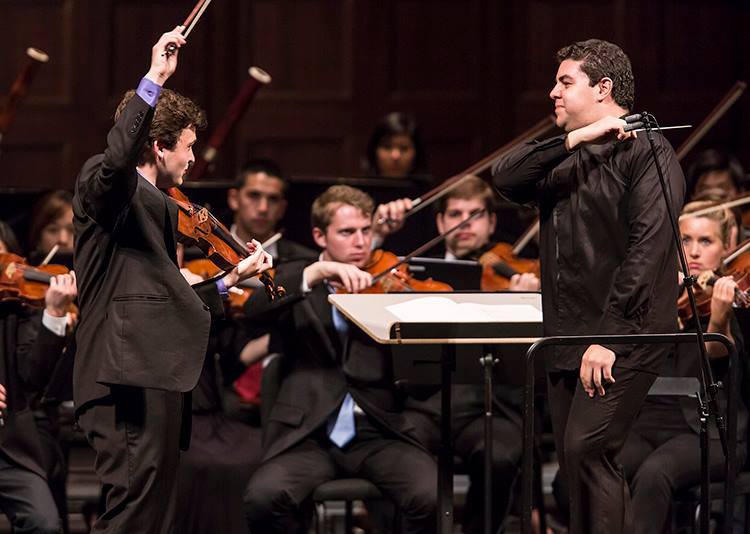 Matous and Simon Michal, a pair of Czech brothers who are former #1s at the Verbier summer festival, have joined the CSO second violins, starting now.

Matous Michal played in the first violin section of Chicago’s Grant Park Symphony Orchestra during summer 2015, after serving as the concertmaster for the Verbier Festival Orchestra in 2014. Prior to this he was concertmaster of The Juilliard Orchestra for four years while completing a Bachelor of Music degree there, and also served as concertmaster at The Manhattan School of Music where he received his Master’s degree in Orchestral Performance in 2014. He has also been concertmaster of the Music Academy of the West Festival Orchestra where he was a finalist in the Music Academy’s Concerto competition in 2013. He completed his undergraduate studies at the Prague Conservatory in 2010, during which time he served as the concertmaster there.

Simon Michal was appointed concertmaster of the Verbier Festival Orchestra this past year after holding the same position with The Juilliard Symphony and the Juilliard Opera from 2011 to 2015. Simon was concertmaster of the Music Academy of the West Festival Orchestra for three years, where he was selected to be a Global Academy Fellow of the New York Philharmonic in 2015. He also served as concertmaster for the Prague Conservatory Symphony where he received his undergraduate degree in violin performance in 2011. Simon is currently working on his Master of Music degree in Orchestral Violin at the Manhattan School of Music, and graduated from The Juilliard School with his Bachelor’s degree last year.

Simon Michal was born in Nachod, in the Czech Republic, and began violin studies at the age of four. He won grand prizes at both the Kocian International Violin Competition and the International Radio Competition for Young Musicians “Concertino Praga.” He has attended masterclasses with CSO Concertmaster Robert Chen, Martin Chalifour, David Chan, and Jorja Fleezanis. His primary teachers have been Glenn Dicterow, Sylvia Rosenberg, and Charles Avsharian.