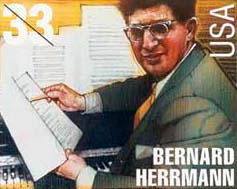 Psycho gets a concert season

The man who wrote the most chilling film score of all time – often emulated, never equalled – is to receive an intensive festival of his works this April in Washington, D.C. The season is the brainchild of our colleague Joseph Horowitz and it’s more than timely.

As Joe points out: Sir Simon Rattle began the current Berlin Philharmonic season with a program including the Berlin premiere of Bernard Herrmann’s Psycho: A Narrative for String Orchestra; the companion works were Arnold Schoenberg’s Die Gluckliche Hand and Carl Nielsen’s Symphony No. 4 (the “Inextinguishable”) – all music of high personal feeling.

The present Bernard Herrmann festival has been undertaken in the conviction that Rattle’s Psycho performance is a harbinger – that Herrmann is a major twentieth century musical personality whose time will come, and relatively soon.

A towering figure in twentieth century American music, Bernard Herrmann (1911-1975) has long been pigeon-holed as a “Hollywood composer.” Though he is widely acknowledged the supreme American composer for film (Citizen Kane, Vertigo, North by Northwest, etc.), his concert output remains virtually unknown. Working with the young Orson Welles and later with the legendary radio and screenwriter Norman Corwin, he was also America’s foremost radio composer, and conductor of a radio orchestra – William Paley’s visionary CBS Symphony – that boldly promoted new and unfamiliar music.

The present festival – a collaboration of PostClassical Ensemble, the National Gallery of Art, the AFI Silver Theatre and Cultural Center, and Georgetown University — is the first ever to celebrate Herrmann “in the round” as one of the most important and influential American musical personalities of his generation. It includes world-premiere recreations of two classic Corwin/Herrmann radio dramas with live actors and orchestra, the DC premiere of Herrmann’s “Psycho: A Narrative for String Orchestra,” a one-hour exploration of “The Music of Psycho” with live orchestra, screenings of 21 films, and much more. In addition to PostClassical Ensemble Music Director Angel Gil-Ordonez and Executive Director Joseph Horowitz (who principally curated the festival), the participants include the conductor/scholar John Mauceri, the Herrmann scholar Christopher Husted, the Corwin scholar Dan Gediman, the film-music scholar Neil Lerner, the composer’s daughter Dorothy Herrmann, and Norman Corwin’s daughter Diane Corwin Okarski.

Bernard Herrmann was born in New York in 1911 and died in Los Angeles in 1975. He joined CBS as a radio conductor, arranger, and composer in 1934 and there promoted a remarkable variety of important music; his studio guests included Bartok and Stravinsky. As an innovative composer for radio, he was the most important musical collaborator with Welles and Corwin. It was his radio work for Welles that led to his historic Citizen Kane score (1941). In Hollywood, Herrmann was especially linked with Alfred Hitchcock. Herrmann’s movie scores, 51 in all, are among the most honored ever created.