The pariah of world orchestras, under an international boycott over its mass sacking of foreign musicians, is now coming under extreme financial pressure.

We understand that players are being offered one-year contracts, instead of the usual two, and are having to take a ten percent pay cut.

The admin is blaming the oil price collapse but they have only themselves to blame for the disaster.

Auditions for several vacancies have been called next month in New York and Chicago. Do. Not. Go. There. 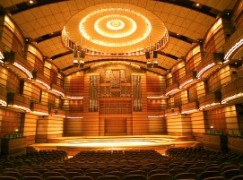