Maestro moves on: Toronto in search for new chief

The search starts now. Toronto is not an easy orchestra to lead, either from the podium or the management office. 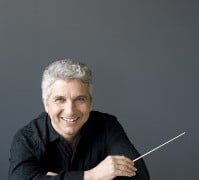