‘There is quality in Mr. Bologna’s voice,’ wrote Bernard Holland in the New York Times when Philip Bologna was among 11 winners of the Metropolitan Opera National Council’s 1984 Auditions.

Philip was getting parts around the country at the time, but not enough to feed a family. It was reported that ‘he supports his wife and two children by working in a General Motors parts warehouse.’

These days, he drives a school bus in Rochester Minnesota.

He loves his work. 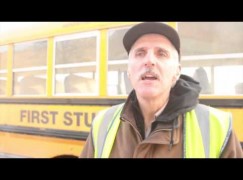 It would be interesting to hear from Philip how opera let him go.