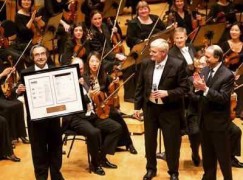 My best night at the Met? Muti

Stefán Höskuldsson has been explaining in the CSO players’ magazine why he has left the Met orchestra to become principal flute with the Chicago Symphony in May 2016.

‘I come from a small town in the east coast of Iceland called Neskaupstadur. At the age of nine I showed talent for the flute and since there were no real flute teachers in my town my father decided that I should get the best possible teacher in Iceland….

‘In 2004 I won the 2nd flute/piccolo audition at the Metropolitan Opera Orchestra. I held that position until 2008 when I won the MET Principal Flute position…

‘In 2010 I had the great good fortune to work with Maestro Muti when he conducted Attila by Verdi at the MET. It was the highlight of my time at the MET*.’

This weekend, Riccardo Muti conducted his 250th concert with Chicago…

and was given something for his wall. Photo (c) Todd Rosenberg.

*UPDATE: This post quotes he original edition of the CSO musicians newsletter. The quotation was later adjusted. One of the editors explains: ‘In the article that you posted about our new principal flute, Stefan Hoskuldsson, there was a revised edition of his spotlight that didn’t get to me in time before I sent out the newsletter. He meant to say that the performance of Attila with Muti was ONE OF the highlights of his time at the MET.’

« Patti Smith does Imagine in Paris

Breaking: Harpsichordist will take over from Harnoncourt »