The violinist has been awarded the Genesis Prize,  given annually to an individual who ‘achieved professional success, contributed to humanity and shown a strong commitment to Jewish causes and the state of Israel.’

Perlman said he was ‘humbled’ by the award. ‘I have always been very proud of my Jewish heritage, which has greatly influenced my music, my world view, and my work as an advocate for individuals whom society often leaves behind,’ he said in a statement. 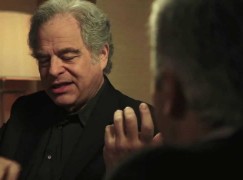