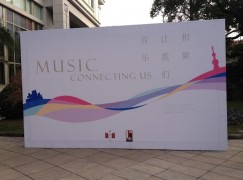 The following announcement is due to be made tomorrow, we hear.

In a new initiative announced this morning in Shanghai, Hantang, an advertisement company based in Shanghai specialising in video productions of high-end lifestyle, laid out plans to bring the Young Singers Project of the Salzburg Festival to China beginning in 2016.

The Young Singers Project, or YSP of Salzburg Festival, was inaugurated in 2008 with the goal of enabling young singers from all over the world to further their education on an international level. In each year 13 to 15 singers was selected by Evamaria Wieser, director of the Young Singers Project, from more than 200 auditions and vocal competitions during her extensive global trip. Each participant will be engaged to sing a minor role in the Festival’s opera productions. In 2015, 13 participants was selected from 10 countries. Festival President Helga Rabl-Stadler revealed that there will be a Chinese singer studying in the USA in YSP 2016. YSP’s current international partners are the Kühne Foundation and L’Occitane.

With the new initiative, Hantang aims to bring the YSP singers to China for concert tour or liederabend across four cities, thus extending their launch pad to Asia for the first time. Though not an artists management company, Hantang has drawn the international attention by giving out awards attached to several leading harp contests and bringing laureates for concert tour in China, primarily in association with the Shanghai Grand Theatre. Described as a win-win situation by Dr Helga Rabl-Stadler, the initiative is the latest partnership of the Salzburg Festival in China. The signing ceremony was participated by Mrs Chen Jingyun, General Manager of Hantang, Frau Silvia Neureiter, Consul General of Austia to China and Dr Rabl-Stadler. Programmes of the Festival’s 2016 edition was also briefly introduced at press conference, whose highlights include the Festival debut of Chinese pianist Yuja Wang.

This is the fourth year in a row since 2012 that the Salzburg Festival held a press conference in China. Hantang is the second Chinese partner of the Salzburg Festival since the Shanghai Grand Theatre was engaged a co-production of La boheme in 2013 directed by Damiano Michieletto. A second scheduled co-production of Il travatore planned at 2015 Festival was called off, leaving much speculation about SGT’s financial condition.

Are these two Russians the next Richter and Gilels? »