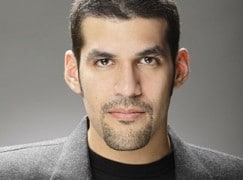 Opera composer: ‘We have to get inside the terrorist’s head’

Jimmy Lopez, composer of Bel Canto which has its world premiere next week in Chicago, has been talking about possible controversy to our friend, Elijah Ho. The plot of Bel Canto centres on a hostage siege in Peru.

Speaking shortly after the Paris terror attacks, Jimmy was asked by Elijah whether the Bel Canto siege fell into the same trap of moral ambivalence as John Adams’s Death of Klinghoffer.

He said: ‘In the US, I don’t think it will elicit the kind of reaction Klinghoffer did. If it were to be staged in Lima, it would be a different story….I think neither Nilo nor I try to take sides…You cannot cast moral judgment on your characters while writing…What we have to do is get into the head of the terrorist and find out what he thinks, what’s driving him…It is dark, definitely, but it’s also a great opportunity, musically…’

‘Even though it’s about an event that happened in 1996, somehow history keeps repeating itself…Bel Canto is not there to open wounds. It will remind us of what keeps happening, but it will help us to heal, that there is a humanity that unites all of us, even the most monstrous of people, that there still has to be some humanity left.’