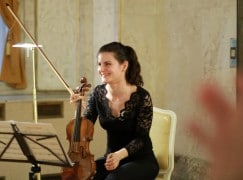 We broke exclusive news yesterday of the admission of two women, Karin Bonelli and Patricia Koll, as full members of the Vienna Philharmonic, a red lipstick day in the orchestra’s dark history of male dominance.

We also broke news that Ekaterina Frolova had been admitted on trial to the first violin section, the start of a compatibility process that usually takes three years.

Today, our mole in the orchestra informs us of a fourth woman who has been quietly admitted.

Adela Frasineanu passed her trial last week for the second violin section and will play in the New Year’s Day concert on television.

Vienna has just begun to move into the second half of the 20th century. This week might prove to be historic.