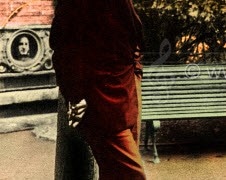 Le Testament de Villon, an opera written in 1920s Paris by the American poet as a revolt against musical impressionism, can be seen in London next month as part of Igor Toronyi-Lalic’s contemporary music festival. The production is billed at the UK premiere of the original version, though the piece does not have much of a performance history.

Its rhythms are said to be more complex than Rite of Spring.

Le Testament had its first complete premiere on BBC radio in 1933, Antheil converting the “two tins and washboard” into a small orchestra. Not that Pound was enthusiastic about the results: “The god damn bastard who sang Villon has no savagery whatsoever. Vegetarian.”

The music for Testament is gruff, untutored and wild, and all the more compelling for it. The ferocious aria of the ancient prostitute Heaulmiere, her lips withered, breasts shrivelled, hits you right between the eyes. Pound called it the “fireworks” of the piece. It wasn’t to be his only operatic attempt. He began two other operas, Cavalcanti and Collis o Heliconii. They were never completed.