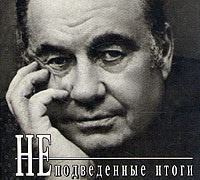 After several brushes with the authorities, Chelovek iz Niotkuda (Man from Nowhere) was suppressed for 20 years because the humourless Soviet premier Leonid Brezhnev thought it was about him.

Ryazanov was, however, too popular with audiences to keep under wraps forever. Among other distinctions, he had an asteroid named after him in outer space.

« Kiri’s back on stage