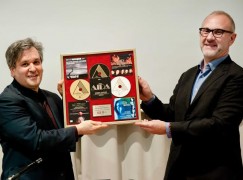 Distribution of small labels is dominated by Naxos and its subsidiary, Select. Now Warner are grabbing a slice.

For the first time, Warner Classics is extending its global distribution and marketing infrastructure to third-party labels. From November 2015, the company will offer a comprehensive, tailored classical service to select partners including orchestras, artists and independent labels.

From November 2015, EuroArts Music will be the first company to join forces with Warner Classics Label Services, initially forphysical distribution in the US and parts of Europe, with the UK, France and Benelux following in 2016. Founded in 1979, EuroArts is one of the world’s leading independent producers and rights owners of audio-visual classical music programmes. ..

“In an ever-changing market environment, Warner Classics is responding to a strong demand for dedicated label services with a classical focus,” said Markus Petersen, Senior Vice President Global Marketing & Operations, Warner Classics and Erato. “We are offering distribution, product management and promotional solutions for high-quality labels, as well as selected orchestras, artists and broadcast partners whose products and content present synergies with Warner Classics brand values. To this end, we are delighted to represent EuroArts and its prestigious audio-visual catalogue as well as its ongoing filmed projects.”

Eliah Seton, President of Alternative Distribution Alliance Worldwide, added: “We are excited to join the forces of ADA Worldwide and Warner Classics in addressing this growing opportunity in the marketplace. ADA will bring to bear its international strength and expertise in distribution and services, to partner with Warner Classics in providing the best possible representation for independent classical music labels across the globe.”

« Did you see the string quartet at Paris Fashion Week?