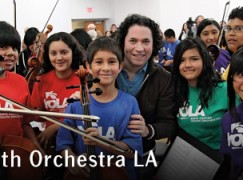 This looks like a really worthwhile idea. An awful lot of dewy-eyed stuff gets written about the benefits of paying in a youth orchestra. There is not much serious study of how, exactly, playing in an orchestra affects children from under-privileged and other backgrounds.

So the LA Phil has set up a pilot study at Stanford University to test the proposition under neutral conditions and academic criteria.

Los Angeles – (October 6, 2015) – The Los Angeles Philharmonic announced today a research collaboration with Stanford SPARQ: Social Psychological Answers to Real-World Questions to measure the effects of YOLA’s rigorous, group classical music education on student and community development. This announcement was made during the 2015 Take A Stand symposium, an annual convening in Los Angeles of El Sistema practitioners from the U.S. and throughout the world.
Los Angeles Philharmonic Association President and CEO Deborah Borda said, “We are eager to embark upon research that will consider our YOLA students the way we do: as young leaders who are acquiring social and musical skills that will last a lifetime. So much research into arts learning has focused on how the arts can be used to improve in-school performance today. This research is about how the arts prepare young people to be successful adultstomorrow.”
The study will examine the effects of YOLA’s ensemble-focused music training on students, parents, and instructors. By examining YOLA, researchers will provide new insights and data about the social impact of El Sistema-inspired music education on children, families and community.
The results of the Stanford SPARQ study will be presented in 2017, coinciding with YOLA’s 10th anniversary, and the culmination of The National Take a Stand Festival, an unprecedented initiative to create a unified national platform for El Sistema-inspired programs throughout the United States. Findings will be distributed widely to provoke field-wide learning. The USC Brain and Creativity Institute will also present results of their five-year longitudinal research project, Effects of Early Childhood Musical Training on Brain and Cognitive Development, a research collaboration launched in 2012 with the LA Phil and YOLA to investigate the cognitive effects of musical training on childhood brain development.

« Did Argerich give Abbado his first break?