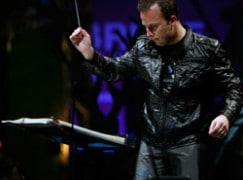 When Yannick Nézet-Séguin was just 23, a retired national politician called Jean-Pierre Goyer fired the conductor of the Orchestre Métropolitain in Montreal and named the young man his successor.

Goyer, who died in 2011, had been Solicitor General in Pierre Trudeau’s government, driving through an agenda of prison reform. He later chaired the arts council of Montreal and was president of its second orchestra when Yannick came to attention.

Now the city has founded a $125,000 Prix Goyer in his name ‘for Extreme Emerging Artist.’

The first winner is a pianist, Philip Chiu.

Montréal pianist Philip Chiu, heralded internationally for the brilliance of his playing and his infectious personality, is the winner of the $125,000 Prix Goyer 2015-2016 for Extreme Emerging Artist. Prix Goyer is the biggest prize in Canada and one of the largest in the world for an artist emerging in classical music.

The award is founded to honour Jean-Pierre Goyer and his contributions to music, arts and culture in Montréal, Québec and Canada. The prize was presented to Philip on Saturday at the Ensemble Caprice concert in Bourgie Hall, Montréal Museum of Fine Arts.