Sadness at death of a pioneering harpist, aged 64

Susan Allen, who died of brain cancer in Seattle on Saturday, was a passionate performer of contemporary music and a disciple of Pierre Boulez (she’s the one on the left). 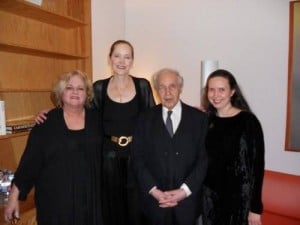 After studies at CalArts, she moved to Boston where she founded the Pro Arte Chamber Orchestra, Cambridge Chamber Players, Marblehead Music Festival, and Composers in Red Sneakers. She went on to perform all over the world and can be heard on many recordings, some of them anonymously as movie soundtracks.

She played the concert harp, the electric harp and the Kayagum (Korean zither) and commissioned over 200 new works, while maintaining a busy academic life. At the time of her early death, Susan was associate dean for academic affairs at her alma mater, Calarts.

Elina Garanca: I’ll be back soon »