An Important Notice About Your Met Opera Performance

Due to extensive street closures related to the Pope’s visit to New York City, the Met’s performance of Il Trovatore on September 25 will be delayed by 30 minutes, allowing audiences additional time to get to the Met. The performance will now start at 8:00pm and will end at approximately 10:50pm.

We recommend that you allow yourself extra time to arrive at the Met.

Please feel free to contact a Customer Care Representative at
212-362-6000 with any questions.

If you have a reservation at the Grand Tier restaurant on the evening of September 25, please call 212-799-3400 to confirm your reservation.

We look forward to welcoming you to the Season Premiere of Il Trovatore. 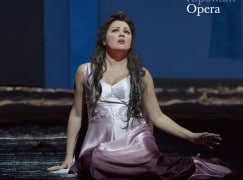