Here’s a fascinating interview with Peter Carter, longterm leader of the Allegri Quartet, about what players should practise on their own and what they should do in a group.

Sample quote: ‘I have no doubt that an enormous amount of time is wasted by well-meaning quartet players practising in ways that don’t help the final product.’ 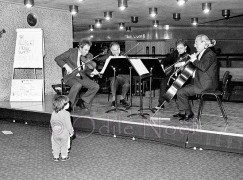