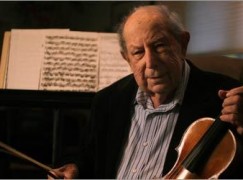 The man who spotted the stolen Stradivarius

Roman Totenberg’s missing Strad, unseen since it was stolen from his college office in 1980,  was recognised by a quiet Pittsburgh luthier when it was offered to him for sale.

‘Every day I get phone calls, emails about ‘Oh, I found the Stradivarius in the attic,’ and of course it normally turns out to be a fake, says Phillip Injean. ‘I’ve had probably over 100, 150 [genuine Strads] in my hands. So when I see a Stradivarius, I know it.’

The man thought to have stolen the Strad was an orchestral violinist who was seen hanging suspiciously around Totenberg’s office. He is no longer alive. A stand partner tells us: ‘ I found him really annoying. He talked all the time and was a real know-all.’