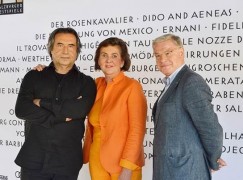 Riccardo Muti: The conductor should be responsible for the action on stage

The maestro has been sharing some thoughts in Salzburg, where he’s conducting a concert performance of Verdi’s Ernani. No director?

From the festival press release:

He likes the idea of a conductor who is not only responsible for the orchestra and the music, but also has a say in the staging. This is especially important to him because so many details are inherent in Verdi’s music, says Riccardo Muti. “Today, the conductor and director are often considered completely different, “ the maestro adds. “However, this used to be different, and the conductor was also responsible for the action on stage – precisely because it cannot be separated.”

He remembers many discussions with directors about the implementation of ideas – for example, in the case of Gluck’sOrfeo ed Euridice, where Gluck wrote a cheerful overture, despite the tragic tale of the opera. “He did it in order to give the audience time to find its seats and finish its small talk,” says Maestro Muti. At the time, such was the custom. Then, however, in a stroke of genius, Gluck modulates abruptly from C Major to C Minor. “Suddenly you’re at a funeral,” the conductor says. At the time, a director wanted him to wait at that very moment until the chorus was on stage. “That, however, would weaken the genius of this musical turning point,” says Riccardo Muti, adding that he hates conservative stagings – and is open to new productions, as long as they are well-made and function in harmony with the music.

He fondly recalls a rehearsal period with Domingo, who had sung the role of Otello more than 300 times at that point. “And yet he took a month to rehearse with us,” says the maestro. “It is a question of respect. Domingo was completely on board with the fact that it was to be a new interpretation.” And developing such an interpretation simply takes time. Riccardo Muti has been studying Ernani already since 1982 – the year he conducted it for the first time at La Scala in Milan.