Is there any limit to musical ingenuity? Tonight in Tokyo: 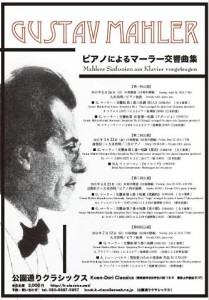 Message received from Dante S. Anzolini:
Tomorrow July 12 at 7PM there will be the world premiere of the first version written in history for solo piano of the Schoenberg Variations for Orchestra. The performance by the pianist Hiroaki Ooi will take place in Tokyo, the so called Coen Dori Classic Series in the Shibuya area of the city. The daring program includes Mahler 9th, for piano solo too!< About the piece…it was composed out of my intentions to be prepared to conduct the orchestral piece for the first time in my life. Later on, when friends made for me a contact with the late Mr. Stein, former disciple and curator of the Schoenberg’s oeuvre, he confessed his disbelief that such a piece could be written (alleging that it was an impossible quest). Luckily he ascertained that the piece did exist, which led to its publication by Belmont, distributed then by Universal. Both Barenboim and James Levine loved the resulting piece, thou they assured me that it was quite hard to bring it to a real performance