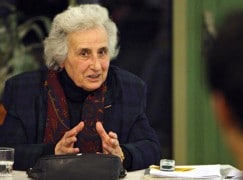 Anita, 90 today, plays her cello on a new Auschwitz documentary

Happy 90th birthday to Anita-Lasker-Wallfisch, a cellist at the heart of London’s orchestral life for half a century.

A survivor of Auschwitz and Bergen-Belsen, Anita took up her cello again earlier this year to play on the soundtrack of a Holocaust documentary composed by her grandson, Benjamin Wallfisch.

The educational video has been screened in the US, but is not yet apparently available elsewhere.

From the US press release:

A woman whose talent at playing the cello helped spare her life at the Auschwitz death camp has picked up her instrument for the first time in more than a decade to score a new documentary being made for the Auschwitz-Birkenau State Museum in Poland.

Anita Lasker-Wallfisch recorded a cello solo for a 15-minute documentary called “Auschwitz,” that recounts the long history of the infamous Nazi German death camp located in Poland. The film was directed by Academy Award® winning documentarian James Molland produced by  Steven Spielberg in conjunction with USC Shoah Foundation – The Institute for Visual History and Education.

When Zimmer initially tapped Wallfisch for the film, he was aware that Wallfisch’s grandmother had played cello when imprisoned at Auschwitz.  Later, after multiple conversations about Lasker-Wallfisch and speculation about whether she might still be able to play, Zimmer, Wallfisch and Moll began to see the bigger picture, and considered the possibility of inviting her to participate.  After conversations with her family, Lasker-Wallfisch agreed to lend her talent to the score.  Throughout her lifetime as a musician she had always been a perfectionist, so the idea of playing without practicing for over a decade was unthinkable.  But once the recording began, the result was staggering.  Her gentle tone and musical gift was as present as ever.

Taking it even a step further, Anita’s son Raphael Wallfisch, himself a celebrated solo cellist, also agreed to play on the film score, involving three generations of a family that survived Auschwitz.  As the film’s narrator Meryl Streep recites in the final moments of the film, “While the humanity of any one person can be extinguished, humanity itself cannot be. It endures.”

« The Met’s concertmaster: An orchestra is not a democracy