When the Nazis stopped my father playing Brahms

Eugene Drucker, violinist of the Emerson Quartet, had a cathartic experience this week, playing a concerto that his father was stopped from performing. He recounts the experience below in an exclusive article for Slipped Disc. 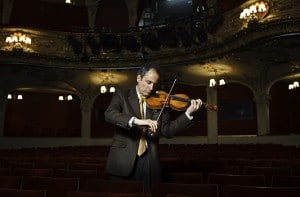 My father’s experience at his graduation concert from the conservatory in Cologne in June 1933 was part of family lore as I grew up. Ernst Drucker was scheduled to play the Brahms Violin Concerto, but one day came to school and found that his name had been crossed off the program. With his teacher Bram Eldering, who as a young man had been close to Brahms and was one of the most famous violin professors in Germany during the interwar period, my father went to the office of the newly installed Nazi administrative director of the conservatory. Eldering threatened to resign if his pupil would not be permitted to perform. A compromise was reached: my father would be allowed to play, but only the first movement of the concerto.

The evening of the concert, as he walked onstage at Cologne’s famous Gürzenich auditorium, my father saw that the first three rows were lined with SA Brownshirts. He was running a high fever but was determined not to cancel; in spite of the ill will that he must have felt from those directly in front of him, he played his best and was praised by his teacher afterward. Several well-established newspapers reviewed his performance enthusiastically. But the Nazi party press organ, the Völkische Beobachter, printed a one-sentence critique: “It is beyond our comprehension that the immortal German violin concerto of Brahms could be entrusted to a Jew.” My father wrote a letter to the editor pointing out that Brahms had dedicated his immortal concerto to the Jew, Joseph Joachim, who advised him on the technicalities of the violin part.

My father had the opportunity to play the entire concerto just a few years later as one of the concertmasters of the Jüdischer Kulturbund, a nationwide organization that allowed German Jews to continue having a cultural life after they had been excluded from mainstream events. This cultural federation, with branches in all the major German cities, offered employment to Jewish musicians, artists, actors and dancers who otherwise would have had no opportunities to practice their art or make a living.

There was an administrative staff that numbered 400 in Berlin alone. The Kulturbund had 60,000 subscribers, whose membership dues paid the salaries of the employees. It also provided an avenue through which German Jews could learn more about their Hebrew and Yiddish heritage. My father always spoke of the Kulturbund as a positive force in his life. It was only after his death that I became aware of questions that some Jewish observers had raised about the organization: did it lull German Jews into a false sense of security because they could hold onto their precious cultural life and even, for awhile, continue to enjoy the noblest manifestations of German culture? Such questions arose largely with the benefit of hindsight; few people could have predicted in the mid-1930s the full extent of the horrors that were to follow. And many of these same German Jews that performed for the Kulturbund and attended its events worked hard and long to obtain the necessary documentation that would allow them to emigrate to the U.S., U.K. or other countries. All the possible destinations had yearly quotas for Jews. Unfortunately, many German Jews did not make it out of the country in time to escape the Final Solution. My father was fortunate enough to emigrate from Germany to the United States with his entire immediate family in September 1938, two months before Kristallnacht.

Martin Goldsmith’s excellent book The Inextinguishable Symphony records the history of the Kulturbund through a personal lens, as both his parents had played in the orchestra in Frankfurt. Based on an interview with me, Mr. Goldsmith included the story of my father’s graduation concert, even though that had nothing to do with the Kulturbund. But as I found out this past week, maybe in a way it did: the restriction of his performance was, on a very small scale, emblematic of what was to come. The curtailment of human liberty in all spheres of activity presages the gravest existential threats. Disenfranchised German Jewry, doomed to exile, fragmentation and death, found a way to hold on to its identity, to continue to celebrate what is beautiful in life even as it looked for a way back from the edge of the abyss.

I played three concerts in Israel last week to commemorate the Jüdischer Kulturbund and my father’s leading role in the federation’s orchestra in Frankfurt during the 1930s. The final event, at the Tel Aviv Museum, featured a panel discussion that preceded a program of chamber and orchestral music. I am grateful to the outstanding cellist Hillel Zori, who invited me to be a key participant; to his brother Nitai, an excellent violinist and violist who played chamber music with me; and to the venerable Noam Sheriff, who sympathetically accompanied me in the Brahms Violin Concerto with the Raanana Symphonette Orchestra.

Though I don’t frequently perform as a soloist, I welcome the opportunity when it arises. The last time I played the Brahms Concerto was in December 2009, with the Jerusalem Symphony Orchestra under the direction of Leon Botstein. Another personal footnote: my novel The Savior, published by Simon & Schuster in 2007, is about an imaginary German violinist caught in a moral dilemma during the final months of the Third Reich. A flashback to 1933 tells the story of my father’s graduation concert as something that happened to the protagonist’s best friend, a young Jewish violinist named Ernst.

« Sex with students ‘does not make a teacher a rapist’