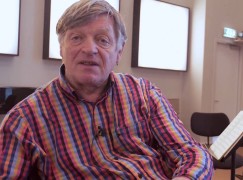 The violinist Peter Cropper, founder of the Lindsay Quartet and creator of Sheffield’s Music on the Round concert series, died on Saturday, aged 69.

Lancashire born, he formed the quartet in 1965 with Ronald Birks (violin), Roger Bigley (viola; later Robin Ireland) and Bernard Gregor-Smith (cello), while they were students at the Royal Academy of Music. They played together for 40 years and made numerous recordings, including a complete set of the Beethoven quartets and many of Haydn’s.