The singer, who cancelled engagements for the past few weeks to be at his sister’s bedside in Boston, has just tweeted: ‘RIP my beloved sister ! I love you. May God bless you. Your brother. Plàcido’ 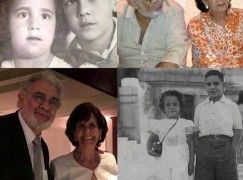 It is with my upmost profound sadness that I announce the passing of my beloved and adored sister Maria José. She left us last night at 7:45 PM at Massachusetts General Hospital in the city of Boston, surrounded by the entire family.
She is survived by her devoted husband; my brother-in law Alfonso, 4 amazing children, José Luis, Pili, Maite and Alfonso; 6 beautiful grandchildren, Rodrigo, Francisco, Andoni, Paola, Constanza, Iker and their respective extraordinary parents, Monica, Paco and Marcela.
Maria José rest in peace and may God welcome your precious and kind soul into heaven. You will be tremendously missed and I know our dear parents would have been extremely proud to see how caring, devotedly and above all unselfishly you led your life, always thinking and putting everyone else before you. I love you Gordita, your brother… Plácido.
I thank everyone in advance for your kind consideration and understanding during our family’s time of mourning.