Dumb? Conservatoire gives PhD to singer ‘who made us look stupid’

The next stage of degree devaluation has arrived.

The Royal Conservatoire of Scotland has announced the award of an honorary doctorate to the Britain’s Got Talent singer Susan Boyle, of whom circusmaster Simon Cowell famously said ‘she made us look stupid’.

Ms Boyle, 54, said: ‘I am truly honoured to be receiving this doctorate. It is brilliant and I thank the RCS for even considering me, let alone actually awarding me with this great privilege.’

Let us not dwell here on issues of intelligence. Stick to commonsense: what’s the sense of the RCS lowering itself to award its highest degree to a singer with no formal education?

Surely what the RCS is signalling is that there is no point in having an education in music, and that its own existence is redundant.

Or are we missing something here? 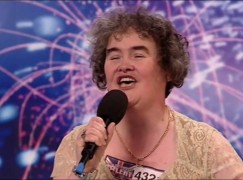