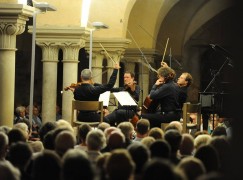 The violinist Stefan Arzberger, charged with attempted murder after an incident in a New York hotel, has failed in an appeal to have his passport returned so that he can travel again with the Leipzig Quartet. He has been ordered to return to court for a further hearing on June 18. Here’s a statement by his attorney:

‘We appeared today in court asking the judge to permit Stefan to travel internationally with his Quartet. This request was denied once again, notwithstanding the very strong evidence that he is not guilty of the charges and the undeniable fact that he, too, was the victim of a crime the evening in question.

‘We will now continue preparing our defense, which will include the forensic analysis of hair samples to identify, if possible, the drug that was likely administered to him by the person who stole his property and fraudulently used his credit and bank cards, and we will also consult with an expert in pharmotoxicology and a psychiatrist to better understand the circumstances that led to the charges. We thank the many hundreds of people who have expressed support for Stefan during this very difficult time and will keep you updated regarding developments in the case.
Any help for Stefan is welcome!

‘We look forward to a positive outcome so Stefan can put this behind him and return to what he does best – making beautiful music with his Quartet.
—
Richard Levitt’