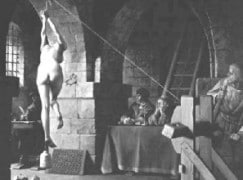 The composer who mutilated his wife also tortured his mistress

Aurelia d’Errico, a former mistress of his, was brought to trial with an associate in 1603, accused of witchcraft against him. Gesualdo was chronically unwell. His doctors gave evidence that, as his illness did not respond to normal remedies, it must be supernatural. Aurelia confessed, but under torture, which of course means no reliance can be placed on a single thing she said.

And the first part here.

« Music critic walks out on his record collection