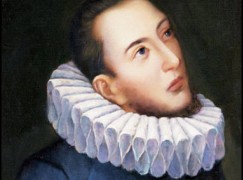 Why did composer mutilate his wife?

The world of music knows that Carlo Gesualdo, Prince of Venosa, murdered his wife and her lover on the night of  16 October 1590. The murder was premeditated and very well-organised. Gesualdo was generally a cold fish. But in the act of murder he deliberately chopped his wife to pieces. Why would a man do something like that?

I Fagiolini, the vocal ensemble, called in a forensic psychiatrist to assist with their forthcoming Gesualdo project. Read her clinical assessment here.

« What artists are getting paid in Italy