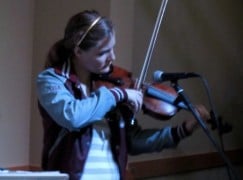 When a music college sacks your teacher

When Jinty McTavish went to Northwestern University at the start of the current academic year, it was to study viola with Roland Vamos. Barely had she settled in than Professor Vamos, an internationally renowned teacher, was sacked. NWU offered no explanation. What would you expect Jinty to do? Here’s her account of events.

When I came to Northwestern University, I had every intention of getting my master’s degree. I was so incredibly excited to begin my studies at such a beautiful school that was located so close to downtown Chicago and offered so many inspiring things. However, as I began my studies, I began to realize that this place wasn’t all that I had expected it to be. While there were several things from the beginning of my studies here that I didn’t like, there was one main event that made me to decide to leave the school. When I came back from Christmas break this year, the Bienen school of music had unfortunately decided that they didn’t want to have the highly esteemed and amazing pedagogue, Roland Vamos, at their institution as a professor anymore. They had also decided that this would happen without first discussing it with all of Mr. Vamos’ students, many of whom had come to the school without much scholarship to specifically study with him. I was so incredibly shocked. How could such a wise and sweet man who had so much to offer be pushed out? And how could the school have neglected to have even let his students know that they were doing so? Students who wanted to study with him?

The entire month of January was spent banding together with students to organize a meeting with either the dean of Bienen or someone higher up to start an open conversation about what we had been hearing. When our first email was met with a snarky response, which told us that we shouldn’t be worrying because our teachers would be with us for this year (saying nothing about following years and nothing about organizing a meeting to make us as students feel better) I got angry and frustrated. What is the purpose of an administration other than to the students and their teachers? Aren’t we the ones paying their salary? What is a music school without those teachers? Especially teachers as highly regarded as the Vamos’?

Many of you might ask, “how did this situation affect you, since you weren’t a viola student?” Since the Vamos’ are married and teach together famously as a team, this affected both of them equally. How could Mrs. Vamos continue teaching at an institution that so highly disrespected her other half? Even if Mr. Vamos had been the only one to stop teaching, it would have affected me the same. It would have kept me from studying under the wonderful Vamos team!

After fighting with the students via letters to try to contact the President and Provost since we hadn’t received any indication that the dean wanted to organize a meeting with us, we finally received another letter from the dean of Bienen. This letter was only written to let us know that the Vamos’ had resigned from NU. The letter assured all of us that steps would be taken to secure a new teacher. No mention was made of taking the ballots from the students on this matter.

My decision was made final. I will be leaving NU after this quarter. I will be continuing my studies with the Vamos’ privately. This has been a very difficult quarter for me, but I am happy and I am doing well! I get to study with the teacher I came to study with. I also get more practice time and more opportunities to travel and hopefully begin participating in violin competitions.

If you’ve made it this far into my post. Thank you. I think this story needs to be shared so that people are able to see what really happened. I was one of the lucky people who wasn’t severely impacted by the administration’s poor handling of the situation. I have a plan. There are students in my studio who are under intense stress right now trying to scramble auditions together or figure out some way to finish their degree with the teachers they had wanted to study with. I am so thankful for the colleagues and new friends I have met during my time at Bienen, and I am excited to move forward on this new path.

If you want to share my story, that would be extremely welcome. Northwestern has neglected to tell auditioning students at this point that both Vamos’ will not be teaching next year. I think it only fair that everyone hears this story and gets a heads up on what has happened.

Slipped Disc would welcome a response from NWU and the Bienen school of music. If you have been subjected to a similar experience in ollege, please share it in Comments.

« Valery Gergiev: ‘Am I supposed to shout that Russia has a terrible president’?