Early music leader has died, at 94

Denys Darlow, an influential teacher and conductor of historically informed performance, has passed away.
Founder of the Tilford Bach Festival in the early 50s and later the London Handel Festival, Denys worked with many of Britain’s finest baroque musicians and singers, most notably in rarely performed Handel.

While making my first tentative steps in the business I had the chance to sing alongside Emma Kirkby, James Bowman, Stephen Varcoe and Charles Daniels under Denys’ direction – a vocal masterclass in style and technique. Denys was a huge supporter of young talent as conductor, teacher and choirmaster. Perhaps this was most evident in his many years as conductor of Handel Opera at the Royal College and Royal Academy. 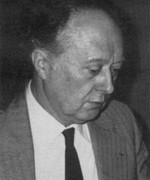 Denys was a man of strong faith and perhaps my most treasured memory of our work together was the Good Friday St. Matthew Passion at St. George’s Hanover Square (where Denys was also organist for many years). This was not a performance but an act of worship, sung in English in Denys’ own translation with a sermon before Part 2 and the audience/congregation would also sing the hymns when appropriate. What endeared me to Denys’ idea of ‘historically informed performance’ was not just the recreation of how the music was played but more importantly why.