Hong Kong’s traditional Chinese orchestra has sacked three principal players after the called for a change of management.  Hsin Hsiao-ling, Hsin Hsiao-hung and Liu Yang, principals of the orchestra’s gaohu, erhu and zhonghu sections, were fired with immediate effect. There is no immediate sign that the dispute is connected to the local democracy protests. nThe sackings were announced on the eve of the Chinese new year. 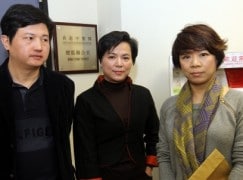