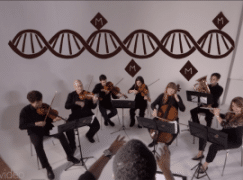 How DNA works: the secret’s found in an orchestra

From our science correspondent:

Cells use their DNA code in different ways, depending on their jobs — just as the orchestra in this video can perform one piece of music in many different ways. The combination of changes in gene expression in a cell is called its epigenome.

For more than a decade, scientists have had access to a reference human genome. Now, the equivalent for the epigenome has been published, in a collection of papers appearing on 18 February in Nature and several other journals. A large international group of researchers has put together 111 epigenomes from different human cell types, including all the major organs, immune cells and embryonic stem cells.