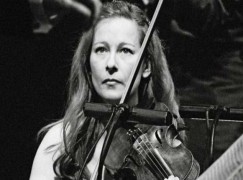 In an extraordinary act of cultural diplomacy, the violinist Anne Gravoin – who is married to Prime Minister Manuel Valls – took the Alma Chamber Orchestra to play in Algiers this week.

The conductor was Lionel Bringuier, but Gravoin, a concert soloist and musical entrepreneur, is listed as artistic director of the tour.

She told France 24: ‘It’s a coming together. People can unite around music, listen to the same music together, and each person can experience it in a different way. That’s why we make music. We’ll give it our all for everything we play this evening.’

Relations between France and Algeria have been fraught with tension. France has a large Algerian-Moslem minority. The gunmen who attacked the satirical journal Charlie Hebdo were of Algerian origin.

Gravoin’s concert tour will have both external and internal repercussions. It is both a bold move and a brave one.

« What clears your ears in the morning?

How DNA works: the secret’s found in an orchestra »