A remarkable document has been retrieved and published by two Mahler scholars, Morten Solvik and Stephen E. Hefling. It consists of a letter to her literary executor by Natalie Bauer-Lechner, a viola player who attached herself to Mahler at college and became, for a decade, his personal chronicle during vacations that she took with his family. Her memoirs are vivid and, to all appearances, invaluably objective.

Natalie was in love with Mahler, of that there is no question. Mahler mostly tolerated her and was sometimes irritated enough to banish her. After his marriage to Alma in March 1902, she was expunged from his life. She died impoverished in 1921.

It has been generally assumed until this discovery that Mahler was not physically attracted to Natalie – in fact, actively repelled by her. There is one incident in Berlin when she appeared to force herself upon him and was driven from his room.

Natalie goes on to list in the letter several more of Mahler’s lovers, including the singers Marie Renard, Rita Michalek and Selma Kurz –  but not his protégée Anna von Mildenburg, with whom we know from passionate letters and other evidence that he had a relationship.

So what are we to make of this fascinating new document (which you can read here in German and English)?

If the letter is factual, every Mahler biography including my own will have to be rewritten. If not, it may cast doubt on the authenticity of other facts for which we rely upon Natalie as sole witness. 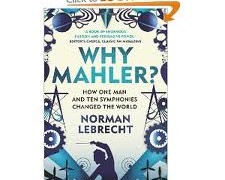 Given certain internal inconsistencies in the letter, some of which are noted by Solvik and Hefling, the prospect of rewriting biographies  seems unlikely for the time being. Natalie , when she wrote this document,was a woman in her late 50s, looking back on two men, Lipiner and Mahler, neither of whom returned her feelings. She loathed Justi and Alma and may have revenge. She was also unwell, with spells of amnesia and mental illness.

These caveats aside, the letter cannot be ignored. The passage in which she describes her first lovemaking with Mahler deserves to be widely read – not least because Natalie maintains that it was his love for her that brought the third symphony and ten songs into being:

‘Gustav drew me up to his room in the attic…. The way we found ourselves there’ locked in tight quarters and separated from the rest of the world, unfolding our entire lives to each other until the early dawn in the most moving, intimate Scheherezadian manner of telling; the way that the creative power in Mahler, drained away for ten years, returned anew, more powerful than ever because of my belief in his genius and my enthusiastic encouragement…. Would it not have been a wonder, even a sin, if such a transfiguration and consummation of life had not been followed by the highest expression of love?’