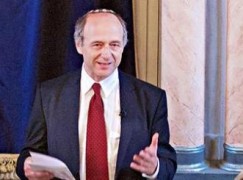 The Budapest Festival Orchestra, conductor Ivan Fischer, is on a tour of towns and villages that were stripped bare of Jews during the Nazi-led Holocaust of 1944-45. Many synagogues have stood derelict ever since.

‘I come from a Jewish family,’ said Fischer. ‘My grandparents lived in a typical Hungarian village like this one and they were deported to Auschwitz. My mother, their only child, survived because she was hiding.

‘Hungary’s Holocaust was an especially tragic one, because proportionally it was an incredibly high number killed – about 500,000 Jews [from a population of 800,000]. Jews were almost completely wiped out in villages. That leaves us with many abandoned synagogues in the countryside…

Tthe people living in the community only have the experience of an empty building. They know very little about what it was for, what its real function was. Maybe, if they understand these were ordinary people, not some sort of strange cannibals – that these were their neighbours and their children played together – it could reduce some feelings of antisemitism or antagonism. If only a few of them think twice when they hear the next hate speech, then we will have accomplished a lot.’

Full – and very moving – report in the JC, here.