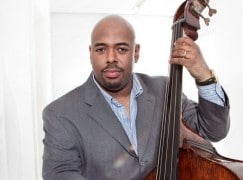 The absurd, draconian results of a well-intentioned White House measure to protect elephants has united the museum world with musicians who, like Christian McBride (pictured) earlier this week, are getting their bows and instruments confiscated by an out-of-control Transport Security Administration.  Here’s part of an AP report.

VERMILLION, S.D. (AP) — Museums and musicians are concerned that the U.S. Fish and Wildlife Service’s stricter rules on the transport of items containing elephant ivory are inflicting unintended complications on the music community.

The new strategy for fighting trafficking through enforcement, approved by President Barack Obama in February, puts a near complete ban on the commercial trade of elephant ivory.

Musicians and collectors say the rules will limit their ability to travel abroad with antique and vintage instruments they acquired decades ago, and could put them risk of fines and the possible seizure of their instruments.

“We’ve kind of been caught up in the clampdown that’s designed to prevent the extinction of these populations, but we’re not really the ones causing the problem,” said Arian Sheets, curator of stringed instruments for the National Music Museum in Vermillion.

The order from agency director Daniel Ashe initially allowed the noncommercial import of worked elephant ivory that was legally acquired and removed from the wild prior to February 26, 1976, and has not been sold since then. The agency eased the rule slightly in May, keeping the 1976 acquisition date but extending the instrument sale date to February 25, 2014.

Very few people, Sheets said, kept documentation on ivory before 1989, when the Convention on International Trade in Endangered Species classified the African elephant as endangered and banned sales of Ivory.

Sheets, who is scheduled to testify Tuesday before the House Subcommittee on Fisheries, Wildlife, Oceans and Insular Affairs, said the order applies to items ranging from vintage pianos with 88 ivory keys to smaller ornamental uses such as ivory-tipped violin bows and nuts and pegs on C.F. Martin guitars. She said the directive puts the burden of proof of how the ivory was obtained on the instrument owner instead of on federal agents.

“They don’t have to prove anything,” Sheets said. “All they have to say is, ‘You don’t have the right documentation,’ and your object is gone.”