While researching my BBC series on Music and the Jews, I discovered in the National Sound Library in Jerusalem a series of recordings cut by an ethnomusicologist in the 1930s onto the surface of discarded hospital x-rays. The emergency solution had been devised by Robert Lachman, frustrated by a German ban on exporting shellac to Jews in Palestine. The x-rays still play perfectly when placed on a turntable.

Now I hear that the same method was used by rebels in the Soviet Union in the 1950s to duplicate and disseminate forbidden western recordings by Elvis Presley, Duke Ellington and more. Every x-ray was a potential samizdat record. See them here. 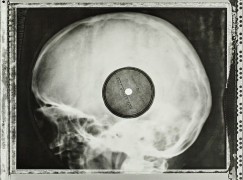