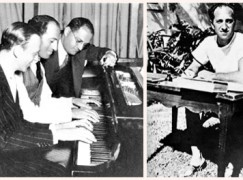 Music and the Jews: so, how’s business?

In the third programme in my Radio 3 series, we look at the cultural action of Jews with western music after the Napoleonic empancipation.

Until the late 1820s, no Jew penetrated the musical mainstream. When Jews finally broke through, there was a driving incentive to change the civilisation that had excluded them for so many centuries. An Israeli composer argues: Wagner was right – the Jews are different.

And then there was business. Jews constituted a considerable part of the new concert and opera audience in Vienna, Berlin and Paris. They became music publishers, impresarios, agents. They founded a large part of the music business.

Want to know how? Was it necessarily so?

The second programme is reviewed here.