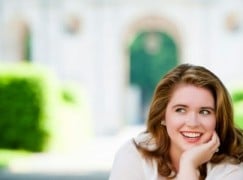 Slipped Disc editorial: Fat should not be an issue in opera

Weasel words have been used by five male, middle-aged critics to describe a promising young soprano whom they deemed physically too heavy for the role. All five suggested she was fat, without actually using the ‘f’ word. The euphemisms were timid and dishonest.

The singer in question, Tara Erraught, may carry slightly more heft than  a size eight, but what has that to do with performance? We want to know from a critic how she sang the role of Octavian at Glyndebourne, how she acted and how she interacted with the rest of the production. None of the reviews told us that. As a result, the five critics have been pilloried before the court of public opinion.

The only national female critic at opening night, Fiona Maddocks of the Observer, contradicted her male colleagues. She tweeted: Ahead of full review: Tara Erraught’s Octavian is touching, innocent, beautifully sung, beautifully acted.

Among other responses, a prominent mezzo-soprano Alice Coote called for a more holistic approach to casting and more sensitive criticism than is permitted by the current obsession with body image (Richard Wagner or Gustav Mahler might well have agreed).

The Guardian newspaper, discomfited by its own critic’s judgement, has published not one but two commentaries of rebuttal. Slippedisc has flared white hot with debate all day and social media are rippling with the aftershocks.

So, to brass tacks: does excess body weight affects artistic performance on stage? Obviously not, as Luciano Pavarotti loudly demonstrated, Pavarotti and as a recent entrant to Britain’s Got Talent amply confirms (below).

Does excess weight affect opera casting? Yes, very often, as almost every singer will attest. Should it? No, of course not, but so long as mass media endorse body fashion there will be no end to weight discrimination in opera.

The issue here is not a proposed reform of opera auditions so much as the language of criticism. The role of opera critic, ill-paid and under-appreciated, is to inform and educate the reading public. Some do so faithfully, some magnificently. But when a critic, or a pack of critics, expresses an unpleasant prejudice – whether on race, sex or appearance – that is an offence for which they and their newspapers must answer. A public apology to the young singer is the least they can offer.

« Does your phone interfere with flight electronics?