How to conduct with both arms at your side

This is Leonard Bernstein’s legendary performance of the finale of Haydn 88 with the Vienna Philharmonic, in which he never lifts a finger. The musicians have learned how to read his facial expressions and the audience in the front rows – just watch those faces – sit there wondering what the maestro gets paid for and expecting the performance to collapse.

It’s a magical human transaction, rooted far back in the history of conducting – it was a party trick of Arthur Nikisch – and achievable only with an orchestra of the highest sensitivity.

Lenny knew his Wieners. Would he ever have tried this in New York? 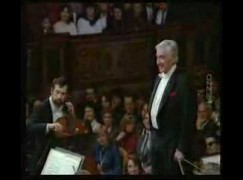