David Frost meets Baldur von Schirach, butcher of Vienna’s Jews. He tells Frost that he met Hitler first at the opera. ‘He was so well informed about music.’

Read more about the character of Richard Strauss here. 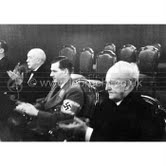