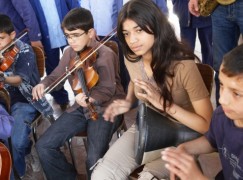 New research: More than half of young players in German orchestras are women

However, chamge can also mean progress. Some 30 percent of orch seats are now occupied by women. Even more encouraging, of young orchestral musicians aged 25 to 30 the proportion of women is now just over 50 percent.

(Don’t tell them in Vienna.)

« Announcing opera baby of the year