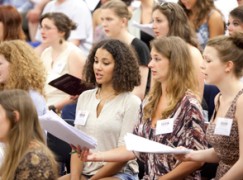 Anna Netrebko speaks out about her son’s condition

The diva has a five year-old son, Tiago, to whom she is devoted. The boy was born with a mild form of autism and diagnosed shortly before his third birthday. Friends tell us he is progressing very well and attending a mainstream school.

Anna, who is bringing up Tiago as a single mother, has now decided to discuss the condition in public in order to give encouragement to other parents. She told the Russian TV programme Pust govoryat:

We noticed that sometimes you start talking to him, and he does not respond. And so it began. For me it was a shock. I was scared, but doctors quickly reassured me that it can be treated.

I want to say to women who have autistic children that they should not be afraid, it can all be developed up to normal standards, that children should go to school and study.

The interview is reported in Autism Daily and widely circulated in German media.

« Opera poster of the week

Reassessing the first rebel of Bayreuth »