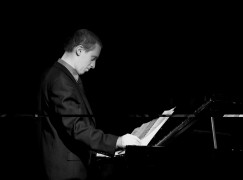 He turns 60 next month and he’ll bring the Berlin Phil for a week of concerts in February 2015. Dates and costs will be split between the South Bank and the Barbican, in part because neither of the rival centres can single-handedly afford Berlin’s impressive fees.

Sir Simon is due to leave Berlin in summer 2018. Reports have linked him to the upcoming vacancy at the London Symphony when Valery Gergiev departs for Munich in 2015. Recent inside whispers indicate that Rattle might consider shortening his Berlin commitment.

The Barbican and Southbank Centre present:
Sir Simon Rattle and the Berliner Philharmoniker – The London Residency 2015
The Barbican Centre and Southbank Centre today announce that they are bringing Sir Simon Rattle and the Berliner Philharmonikerto London for a major residency in 2015.  Following the great success of the orchestra’s London concerts series in 2011, the week-long residency will feature performances in the Barbican Hall, Queen Elizabeth Hall and Royal Festival Hall from 10-15 February 2015. It will bring the two arts centres together in a series of concerts and in creative learning work with young people from a number of London boroughs, both north and south of the river Thames. Tickets go on sale to Barbican and Southbank Centre members on 9 December and to the general public on 11 December.
Sir Simon Rattle has chosen to mark his 60th birthday with this London residency, choosing music that has a special significance for him: a complete cycle of Sibelius’s seven symphonies in honour of the 150th anniversary of the composer’s birth, Mahler’s Symphony No. 2 and music by pioneering German composer Helmut Lachenmann. The residency is also a celebration of the Berliner Philharmoniker and Sir Simon Rattle, one of classical music’s most outstanding artistic partnerships, and a showcase of one of the world’s greatest orchestras.At the core of the Barbican concerts (10, 11, 12 February) is the complete cycle of Sibelius’s symphonies, performed in sequence. ViolinistLeonidas Kavakos joins the orchestra for Sibelius’s Violin Concerto on 11 February. Kavakos has a unique connection and insight to the work: he won the Sibelius violin competition in 1985 and has performed the work to great critical acclaim, including with the Berliner Philharmoniker and Sir Simon Rattle. Kavakos has also made a recording that includes both the concerto’s original 1903/04 version and its final 1905 version.
Southbank Centre’s concerts (13, 14 and 15 February) feature two performances in the Royal Festival Hall of Mahler’s Symphony No. 2 (Resurrection) with soloists Kate Royal (soprano) and Magdalena Kožená (mezzo-soprano); and the London Symphony Chorus andCity of Birmingham Symphony Chorus. Known as a signature work of Rattle’s, the symphony will be performed alongside Helmut Lachenmann’s Tableau in a juxtaposition of old and new sound-worlds that has typified Rattle’s tenure in Berlin. In addition to these performances there will also be: a family concert as part of Southbank Centre’s annual Imagine Children’s Festival, sponsored by The Book People, featuring the 12 Cellists of the Berliner Philharmoniker (15 February 2015, on sale from 25 April 2014); and a chamber performance in the Queen Elizabeth Hall by The Philharmonic Octet Berlin (13 February 2015, on-sale from 25 February 2014) when the group will perform Nielsen’s Serenata in vano, Berwald’s Septet and Schubert’s Octet.
Across the residency, the Barbican and Southbank Centre will join forces to bring together a young mixed-ability orchestra that represents London, working with local music hubs on both sides of the river Thames to recruit, rehearse, lead workshops and to mentor young people in the area. During a period of ten days these young people aged 7-25 will have the opportunity to make music together as a large orchestra and in a range of other formats. They will debate the value of music in society and the impact it has on their lives, whilst also exploring the music that the Berliner Philharmoniker will be performing and the relationship between London and Berlin. The culmination will be a performance at each of the two venues, led by Sir Simon Rattle. The residency also includes family concerts, chamber music and open masterclasses, to be announced in 2014.
Sir Simon Rattle, Chief Conductor and Artistic Director of the Berliner Philharmoniker since September 2002, said: Coming to London with the Berliner Philharmoniker feels like a homecoming, especially because we are performing repertoire that I love: Sibelius, Mahler and Lachenmann. I first heard Mahler’s second symphony aged 11 in Liverpool, and it inspired me to become a conductor. This work was premiered by the Berliner Philharmoniker in 1895 and is at the heart of what this orchestra loves to perform. Sibelius’ music is not frequently performed in Germany, and it is perhaps surprising that the rich, broad sounds of Sibelius really suit this orchestra – come and hear for yourself! I am thrilled that our friends at Southbank Centre and the Barbican are again working together to invite us to London. We will celebrate great music, a great orchestra, and the great work that these cultural centres do in bringing music to the next generation.